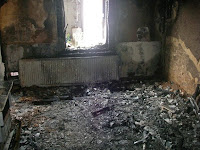 I have been sent a press release by the Fire Brigade regarding a sucessful prosecution of a landlord who was found guilty of breaches of fire safety legislation and ordered to pay nearly £13,000 in fines and costs. The press release reads:

Uxbridge Magistrates’ Court fined Armajit Singh, £5,600 for seven breaches of the Regulatory Reform (Fire Safety) Order 2005. Mr. Singh did not own the premises but was managing it for his uncle and had responsibility for the property’s maintenance and repairs.

The prosecution followed a fire at the house converted into flats on Wood End Green Road, Hayes on 14 September 2007. A man and a woman were woken by the blaze and tried to escape via the staircase but it was engulfed by thick black smoke. They escaped by smashing the first floor bedroom window and jumping out. The woman broke her ankle in the fall and the man suffered deep cuts to his hands.

Fire safety inspectors visited the premises and found that there were a number of faults including no smoke alarm or fire extinguishers in the property and none of the doors were fire resistant.

The Regulatory Reform (Fire Safety) Order 2005 came into force in October 2006. In a landlord and tenant context it provides for those in control of properties and responsible for the maintenance and repairs (generally this will be the landlord) to carry out a fire risk assessment (which must be kept up to date), and to implement appropriate fire safety measures to minimise the risk to life from fire.

Note that the two pictures showing the damage done by the fire are copyright of the London Fire Brigade. 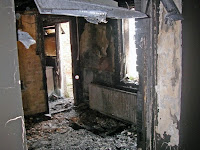 Mind you, maybe Mr Singh got off lightly. In October, Mr Mehmat Parlak was sentenced to four months imprisonment and his company, Watchacre properties limited, was fined £21,000 following a similar prosecution under the Regulations. Landlords be warned!

« VAT changes – how these are being dealt with on the Landlord-Law site
Convicted HMO landlord – doing the community a service? »