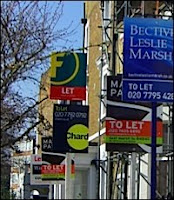 I was a bit shocked, although I suppose not entirely surprised, to read in the excellent 4wallsandaceiling property tribes forum about what some greedy letting agents are doing to replace the renewal commission they are going to lose as a result of the decision in the OFT v. Foxtons case.

They are contacting tenants and persuading them to leave at the end of the fixed term, so they can earn commission on finding a new tenant for the landlord.

In fact they will be gaining twice from this manouvre, as they will presumably get commission from the landlord of the property the tenants are moving too also, having done little work for it.

The agents on the 4walls forum (who don’t do this) ask whether this practice is legal. The answer is no. This is probably a good time to take a look at the law of agency, which most people have either forgotten or think does not exist.

Trotting over to the bookcase to get out my book on agency law, I find this rather good quotation from a Judge in an agency case:

“The position of principal and agent give rise to particular and onerous duties on the part of the agent, and the high standard of conduct required from him springs from the fiduciary relationship between his employer and himself. His position is confidential. It readily lends itself to abuse. A strict and salutary rule is required to meet the special situation.”

The fiducuary duty is an important one.

Under agency law there are a number of principles and rules, which are in essence as follows:

I am sure many landlords will smile ruefully on reading this, their experience having been quite different. From what I hear about many agents (not all of them), they seem to have no idea that they are acting in a fiduciary capacity and appear to be acting in their own interests only.

So what can a landlord do if he finds that his agent has acted against his interests, and persuaded his tenant to leave so he (the agent) can earn a new commission finding a replacement?

Well I would that thought that, as this is a clear breach of the agent’s fiduciary duty, the landlord can go to court and claim both a refund the commission received by the agent for re-letting the his property, and the commission received by the agent respect of the property to which the tenant moved, along with a refund of all expenses incurred by him as a result of the tenant vacating.

It might be an idea, if a clear example of this practice is found, for a test case to be brought (possibly funded by one of the landlords’ associations??), so these agents are made aware of their responsibilities.